The Chiang Mai Flower Festival held annually, in early February, is a grand celebration that also marks the end of the cool season and with plenty of flowers is one of the most colourful events of the year. This year the Australian Honorary Consul was an invited guest to attend the Festival opening in the evening on Friday 2nd February and to the Festival parade on early Saturday morning 3rd February. 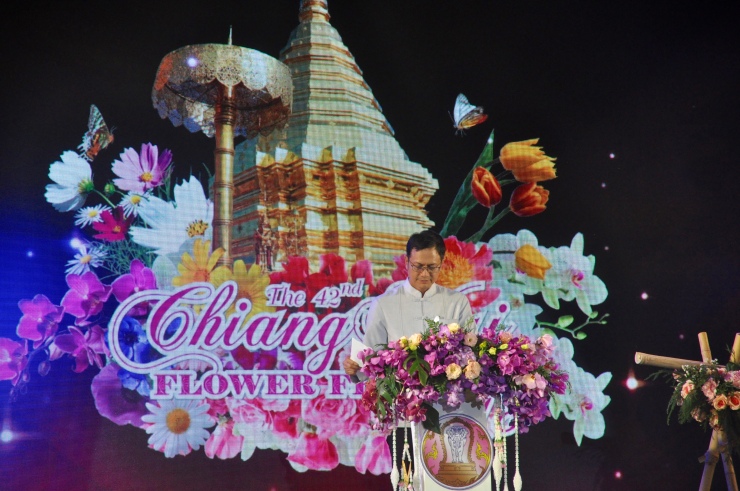 During this event the city showcases vibrant colours ranging from orange and lilac, reds to shades of pink, white and purple. The city streets are adorned with colourful flower beds and boxes. The city, known as the “Rose of the North”, is appropriate and features displays of yellow and white chrysanthemums, and the Damask Rose, a variety found only in Chiang Mai abound. 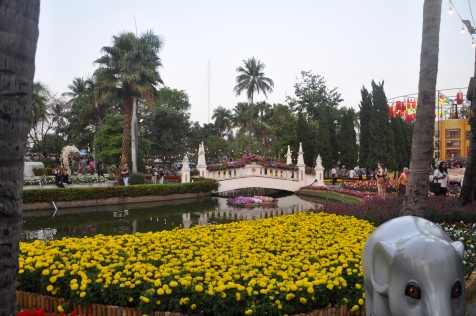 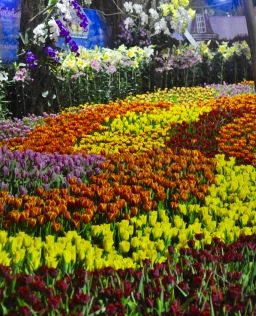 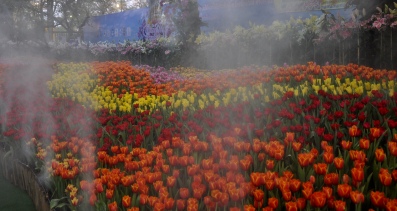 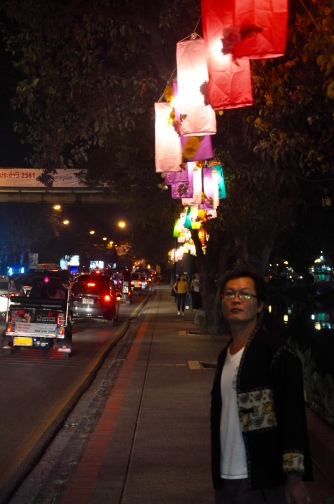 On all three days of the festival, prize blooms & parade floats are on display at Suan Buak Haad park near the city centre. Many types of flowers, miniature tree and orchids are on display for the judges to choose the best of the species. Landscape specialists put on an elaborate display with exotic decorative plants and flowers.

The opening ceremony was held in the city park (Suan Buak Haad around the south-west corner of the moat). An elaborate stage was the focus for opening entertainment, speech by the Governor of Chiang Mai, followed by awards for various achievements in agriculture and festival support. The official opening activity saw some guests invited onto the stage to assist the Governor, including myself and other consular corps members.  It was unexpected but a fun experience and well done event. 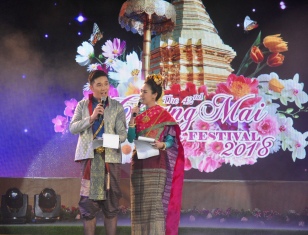 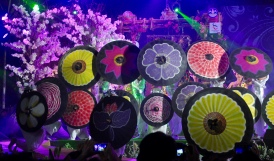 Highlight of the festival is the Flower Parade which takes place on Saturday morning so we were up early to get into town and the review platform by 730.  With little traffic on the roads, to my surprise, we arrived in time to watch the flower parade form up along Charoen Muang Road, apparently all the way from the railway station to Nawarat Bridge. It is very large parade and this year I was surprised to see a little Aussie icon, the Chiangmai Zoo Koala mascot make an appearance too.  Should we have an Aussie theme flower float in the future?? 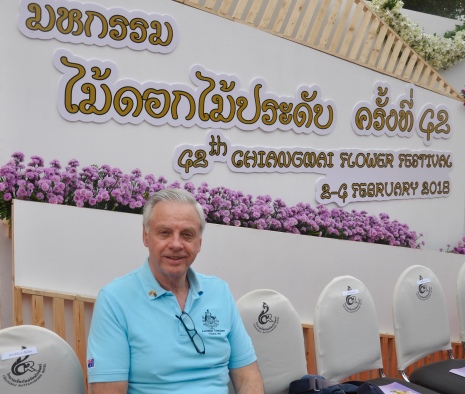 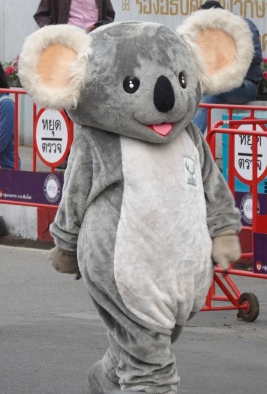 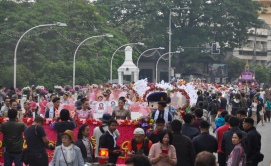 The parade started around 0830 after an opening ceremony, with welcome remarks by the Governor followed by an official opening novelty.  The parade then began passing the review stand, where I luckily had a front row seat, that offered a close up of the passing colourful displays and costumes that moved towards Thaphae Gate. Here the parade turns left and follows the moat around to Suan Buak Haad park. It’s a day to avoid the traffic that results from the road disruptions of the inner city areas. 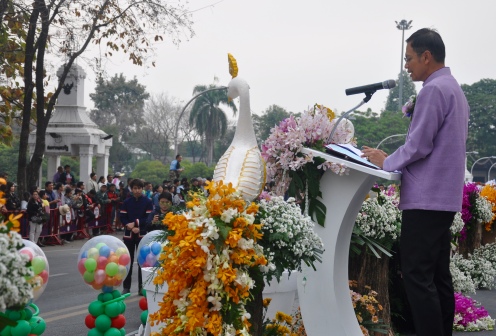 The flower parade moves very slowly, and stops frequently for dancers in traditional costumes to perform Thai dances. Often those taking part in the flower parade hand out flowers to the spectators. Western-style marching bands from local schools and local drumming groups are interspersed among the floats which also have their own load speakers with music.  The floats are uniquely and exquisitely decorated with flowers and pedals – many the being complete just the day or hours before the parade to ensure they are fresh looking. 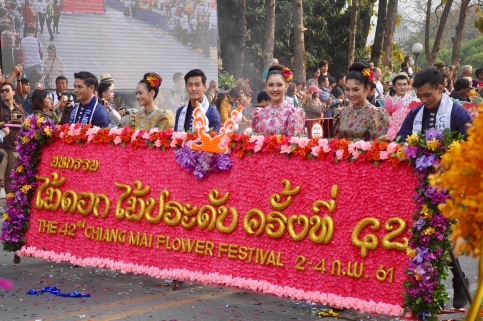 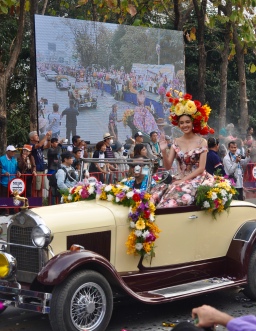 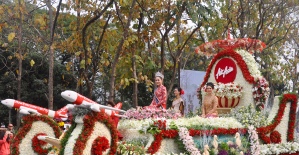 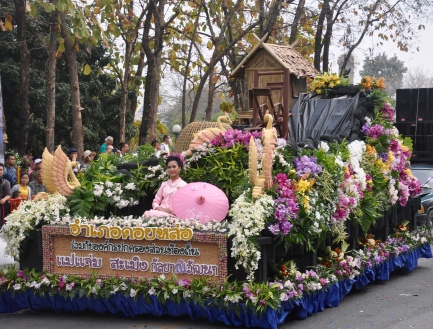 Each of the 25 districts (amphoe) in Chiang Mai province are represented in the parade with a variety of displays. According to Wikipedia (thanks for this info) the districts are further subdivided into 204 subdistricts (tambon) and 2,066 villages (muban).

Each district had a contingent of representatives who were dressed up and marching. Some of the smaller districts combined to march together. On the uniquely decorated floats and carriages are candidates for the Miss Chiang Mai Flower Festival competition. By late afternoon the really serious part of the festival, choosing the Chiang Mai Flower Festival Queen, begins. 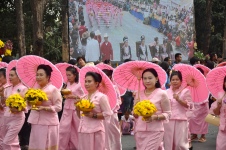 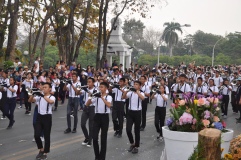 The parade lasts some 4 or so hours and the many visitors to the festival get to walk around the many floats and enjoy the food and vendors who have set up shops around the moat. Loud music and liquid refreshments aid the celebration atmosphere and the party goes on into the evening until the Flower Festival Queen is chosen.

It is a great time and fun atmosphere so worth the effort to visit and participate. Now summer is coming with the heat!

This site uses Akismet to reduce spam. Learn how your comment data is processed.

See this Embassy webpage for information on the Consular Outreach Service: